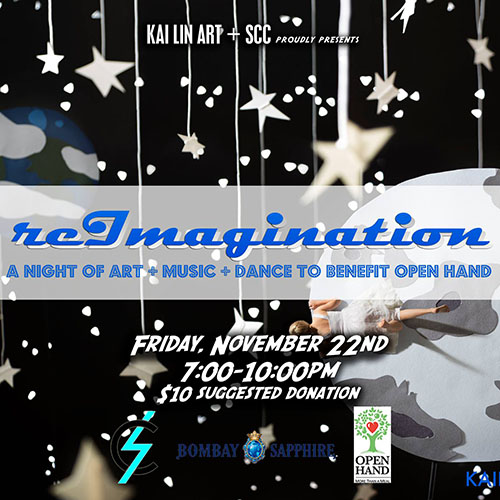 The second installment of “ReImagination” presented as part of “Solace” carried guests back in time with a 1920s theme that was incorporated into the visual art, music, performances, and fashion featured at the event. GRAE Productions brought the visual art on the gallery walls to life at Kai Lin Art. The event featured performers who appeared to have stepped out of a black and white movie dressed in creative costumes that incorporated paper. A portion of the cover for the night was donated to Project Open Hand. The Dorn Brothers, Patrick Heagney, and Cassidy Russell’s visual art was displayed in the gallery, and elements of the art inspired fashion and makeup works by Tye Alexandra, Meeya Thomas, and Stella Reed, which were modeled by the performers. Ballerina Christina Simkovich and Michael Hollingsworth of North Atlanta Dance Theatre interspersed among the guests to support the 1920s vibes along to the music of pianist Chris Moten. Kristina Guede and Tony Schott of “Off Centered” performed acrobatic acts feet away from the guests as they enjoyed artisan cocktails from Bombay Sapphire and hors d’oeuvres from Ben’s Brown Bag.